Have you heard? Our kids don't want our stuff.

I've read several columns lately reminding seniors to pare down, don't leave it all for our heirs to do.  Lots of reminders about this from AARP. I did pare down some after each parent passed but you wouldn't think so to look at the number of boxes I still have.

Mother kept everything, not as a hoarder but as a person who knew what she had and why.  She labeled and neatly cataloged containers.  Did I mention there was SO MUCH stuff? I've already been through several rounds of decision making about what to keep, what to sell and what to donate.

Thank goodness her songs are preserved so our family can continue sharing the music she wrote and recorded.  Her scrapbooks have also been a valuable resource for me as a writer.  The fact that Fern Jones was an organized keeper of things turned out to be important for future generations. We have professional help with her music ("Fern Jones: The Glory Road") and song publishing and now there's a book ("The Glory Road: A Gospel Gypsy Life" from University of Alabama Press, available wherever you buy books) which shares stories and photos from her archives, all because she was a faithful and detailed keeper of things.

The photo up top is of two small things I choose to keep nearby, representing both the happy and sad.  The pink bowl is from her 1950s collection.  I kept only this one piece. The little brass apple is a bell - a very loud one.  In her home in Palm Springs, when ALS confined her to a bedroom down a long hall, for a while she was still able to ring for us.  She often rang to get one of us to put pictures of Daddy on a chest within her view.  She liked to rotate her favorite pictures of him.

My daughter, Cathleen Fern, has the piano her grandmother played. Fern was crazy for pink and Cath had the piano painted.  This is an old spinet, the kind that isn't appreciating in value but provides plenty of memories at home.  We also keep her guitar in view. It's not the best guitar Mother and Daddy owned but it's the one she played late at night while writing her songs or to comfort herself when she couldn't sleep. When my brother and I were very young and her playing woke us in the night, she'd let us stay up if we'd sing her favorite ballads. 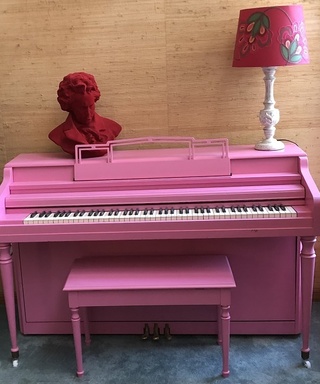 My latest decision is to take no position about what's left, letting my daughter choose the next disposition of Jones memorabilia after I'm gone.  There's still a box filled with Daddy's Bibles.  His briefcase, which was his preacher's traveling chapel, is here with sermon notes still inside.  We have old photos and souvenirs from years of touring the Deep South and some of Mother's correspondence in her fancy handwriting that I've read but then couldn't throw away. Her songs-in-progress are noted in old composition books. Who could get rid of those?

I rationalize this pause in downsizing based on the fact that I have only one child and she's an organizer and thus potentially better equipped, a generation removed from the Reverend Ray and Sister Fern Jones show.